What can I say? Time flies when your having fun, I mean rum, no maybe it’s on the run?

Likely that all three could apply. Or maybe I should just say some things are better left on the dock? Who knows, better yet who cares? Here I am again with an update  (Updates?…maybe…)  So enjoy it as long as it last I suppose, and don’t be surprised when I become a long lost internet cast away once again. 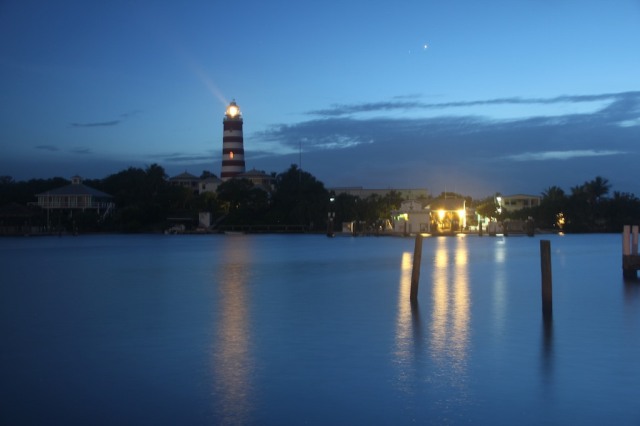 In a ridiculous effort to start where I left off; Since I last wrote my amazing two armed crew “Jam” became an international-globe trotter of sorts.  She some how managed to conjure up a job in Japan while floating around Abaco. Yes, everyone was and still is totally perplexed by this. None the less just a little over a month after we had arrived in Abaco waters, I was waving good bye as the ferry whisked Jam out of Hope Town Harbour bound for Japan. Leaving just me and my furry first mate Gypsy aboard the good ship Lynne Marie, I suddenly found my self a solo sailor. 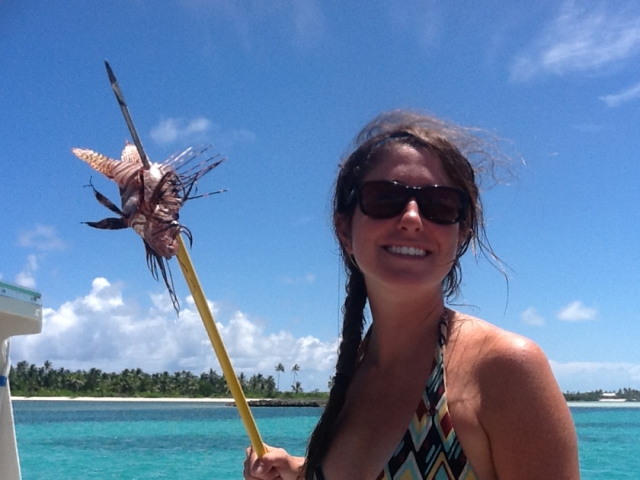 Jam helping out with the Lion Fish invasion

I had known from the start this solo situation was a very real possibility that could present it self at any given moment. Let’s face it not everyone is made for the sailing life and even the best of friendships can become overwhelmed when tumbled to long in a space totaling 27 not so square feet. I always knew that any crew could and would jump ship whenever they pleased. So I was not totally unprepared for this situation, if anything I knew it would come around sooner or later. 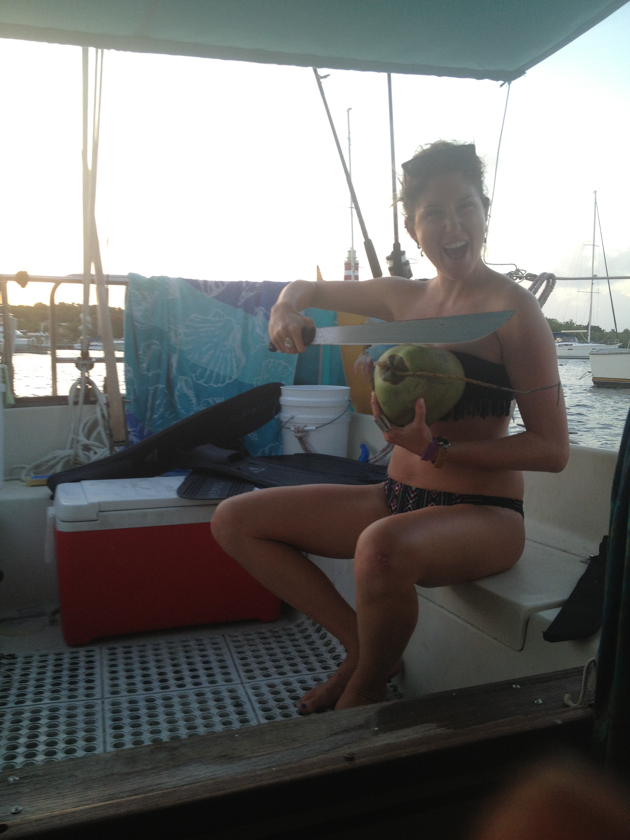 Crakin Coconuts in the Cockpit this chic was made for cruising!

Let me be clear though, Jam’s departure was in no way a case of mutiny. Cruising life suited her well and I could see there a desire to keep on hopping down the island chain. I’m almost certain future sailing exploits await her. That month aboard together beyond being an adventurous good time was a learning, growing, expansive experience. We both took a major plunge, up and quitting perfectly good jobs to run off and see what else life had to offer, and we’ve both reaped the rewards of this decision in our own ways. Truly I don’t believe I could have picked a better crew, and honestly I likely would not have made it off the dock with out her. After three years of working, playing and traveling together, it was a bittersweet goodbye.  Both of us well on our way down intersecting paths of adventures, happiness and freedom.  Jam has now gone, saw, and conquered much of the far east and returned to this hemisphere. We were recently reunited and with her now back in Florida waters I can spy future Caribbean adventures on the horizon, hooray! 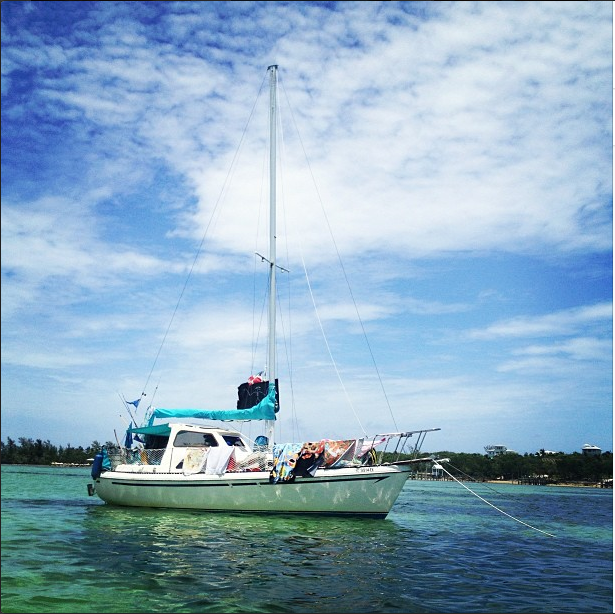 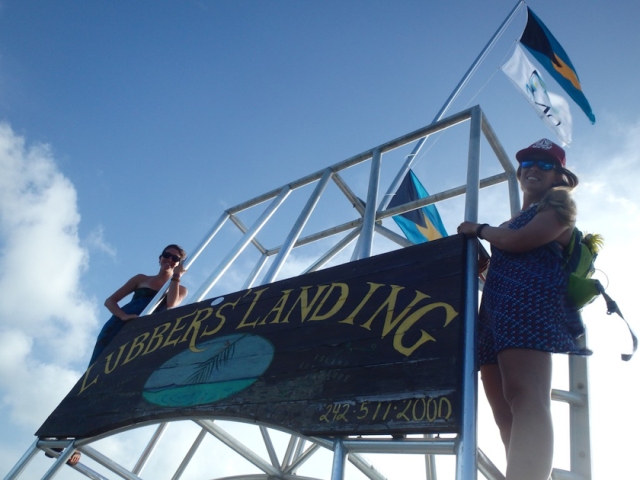 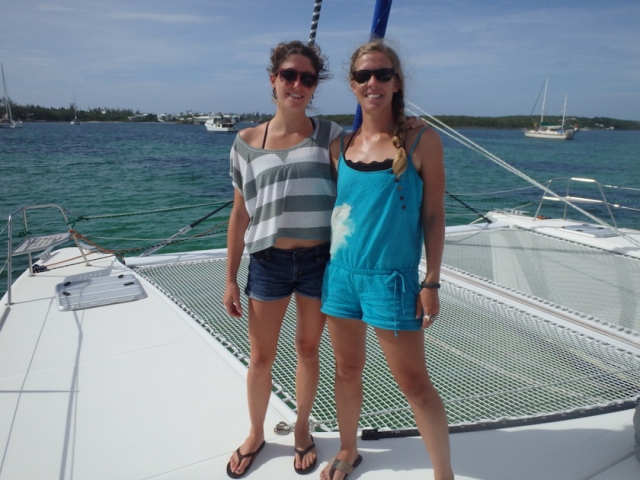 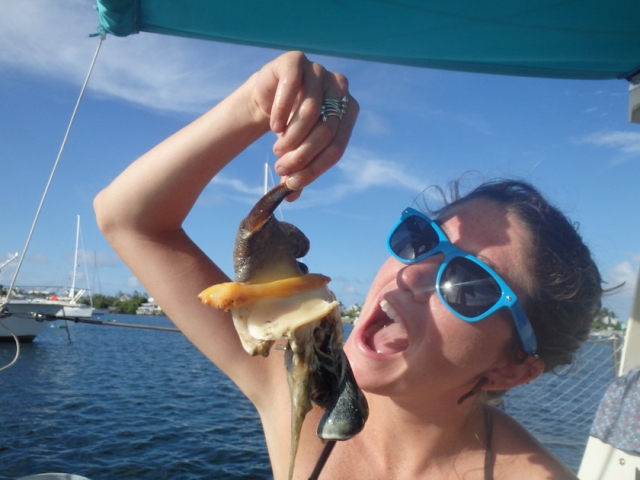 I’d advise cleaning your conch before you eat it…. 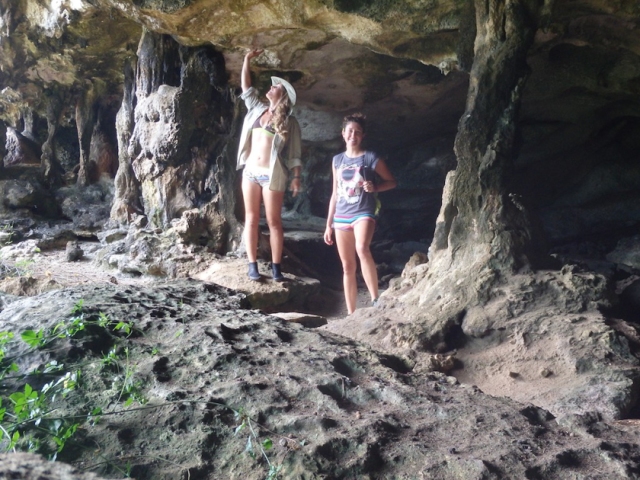 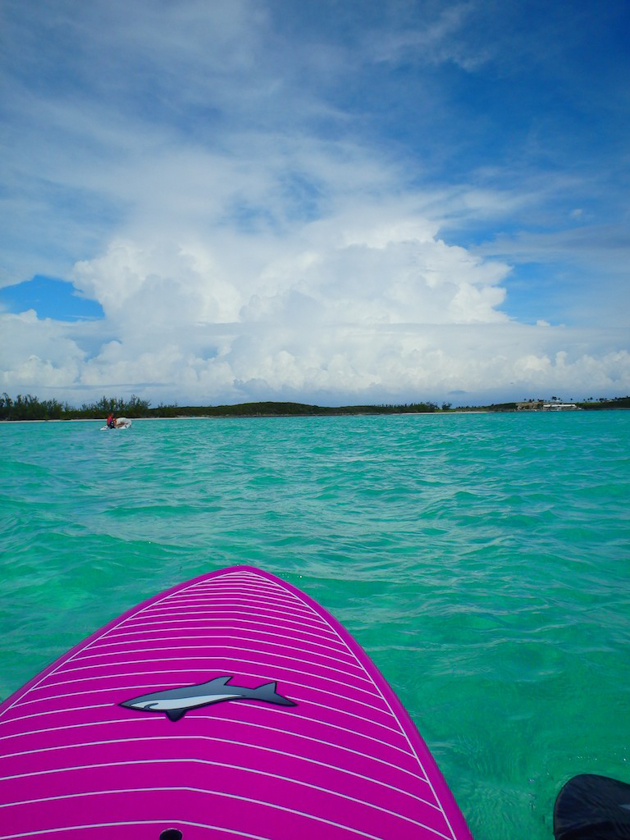 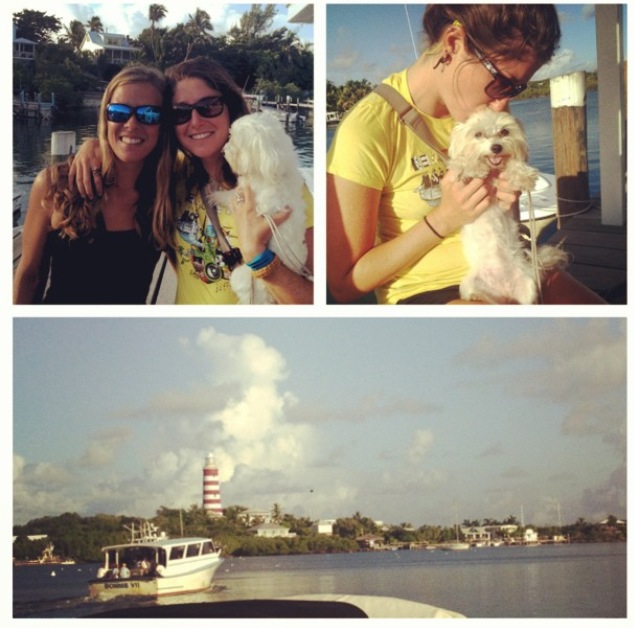 You may now be imagining that I’d soon be getting lonely after Jam’s departure, the truth is I’ve not know a lonely day in Abaco yet, crew or no crew.  My mom had actually flown in for a visit the same week as Jam’s departure and by the time my mom flew out there appeared on the horizon another familiar figure. Woodstar my good neighbors from the one and only Banana River Marina, I didn’t have crew but I did have “da best” buddy boat around! They had ice!! They was rich! 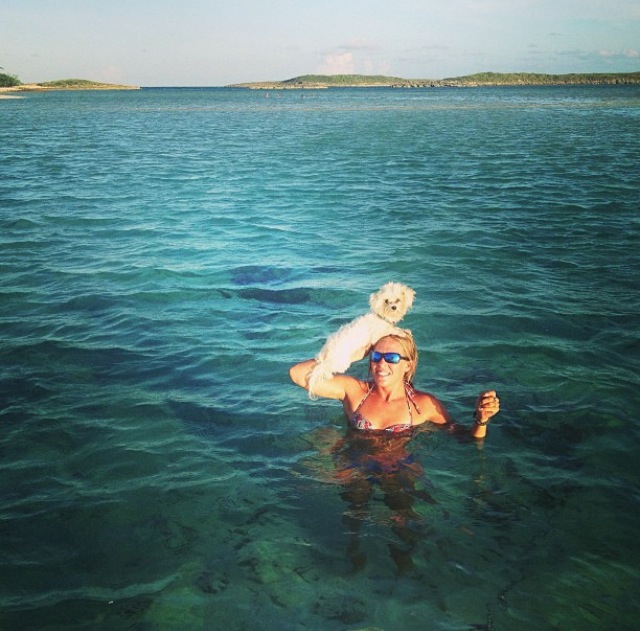 Just me and my furry first mate Gypsy

The months that followed are a blur of long hot days fishing, diving, and exploring every beach, cove, cave and coral of southern Abaco.  Little Harbour, Lynard and The Bright of Old Robinson became favored spots. I saw more sea turtles than I ever imagined I could possibly see in a day. I’d dive daily on beautiful reef covered in sea fans concealing the likes of everything from goliath groupers, turtles, rays, sharks and crawfish. I became adept at free diving and fishing with a Hawaiian sling.  We spend days in the shallows of the Bright seeking out every blue hole we could find to explore.  It was during these days that the captains log was also thrown overboard. I had done pretty well at maintaining a daily log up until this point. Looking back its evident that entries continued to get shorter and shorter, the last couple entries a comical note or two about another day wasted fishing.  In short, life was good and blissfully slow, it was hurricane season and we were the only boats around with the exception of one or two that might pop up for a day moving through. We found some new and old friends in Little Harbour and caught the occasional lift to Cherokee for groceries. Fresh produce became the stuff of folklore, but it seemed there was always enough fish, rice, and beans to go around. Just as all things, these long hot days were made to pass. 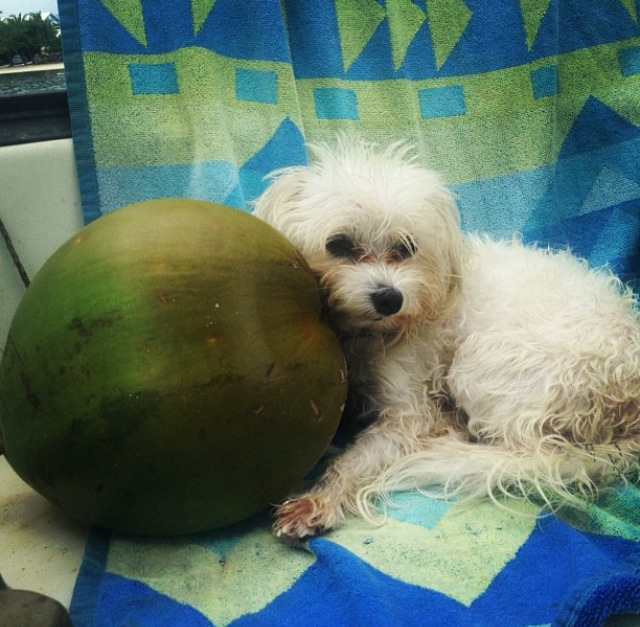 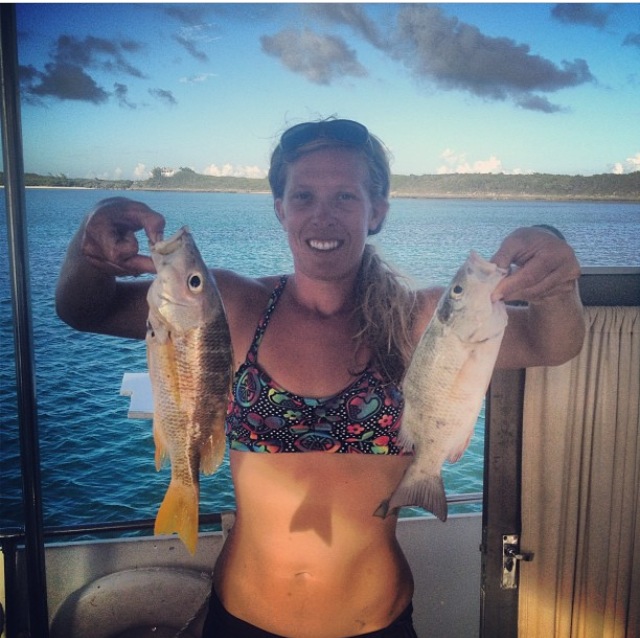 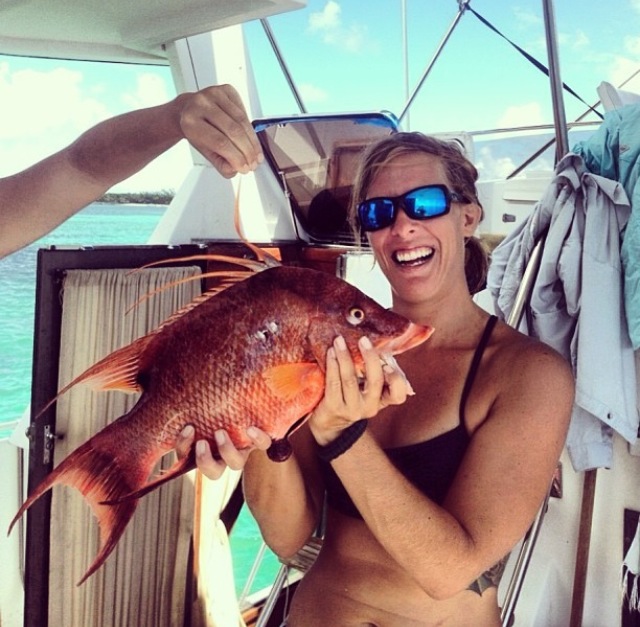 My first Hog Fish, so delicious! 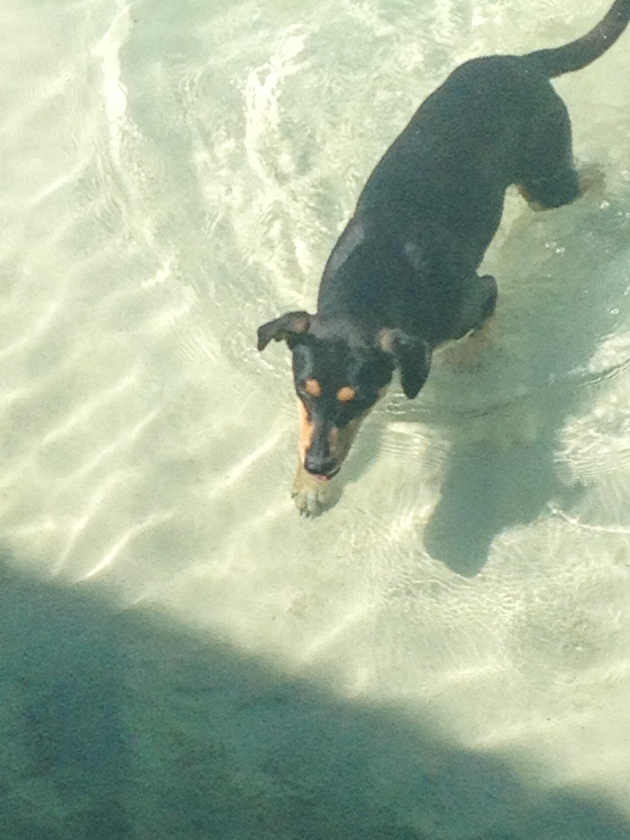 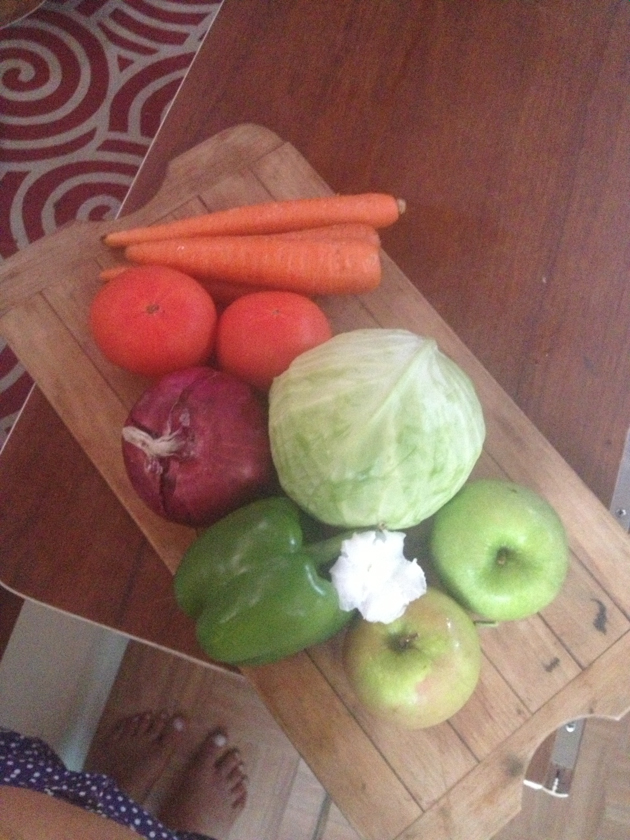 As the end of hurricane season rolled into site murmurs of returning to Florida came bubbling up. Yes I had every intention of returning to Florida when I left, now? After months of floating about Abaco?…  well it sounded like a terrible idea. So I made the call to stay and once again waved goodbye as my friends headed out of Abaco waters. So the new “plan” was to try and keep on moving south! I could, after all always return to Florida if things went awry. I figured once winter arrived I’d probably be able to make some friends and find the right buddy boat to sail south with. Well it didn’t taken long… I found a buddy alright, but in place of sails he had roots! A local boy set a hook right in my heart, and well it’s a bit hard to admit, I’ve tuned back to landlubbing ways over the past year. I got no room to complain though. It’s been nothing short of amazing, and oh so comforting to have some land based resources come my way after 2 years aboard my 27ft floating home, and hey, can there be a better piece of land for a sailor to love than a tiny island on the edge of the great Atlantic? The good news is, while my guy be rooted to this place he is also a well traveled sailor. Sailing and boating is part of everyday life here, which really was the lifestyle I was searching for. I know future cruising endeavors await and in the mean time there’s a garden and local cruising is perfection. In fact my favorite cruising season is now here. Tomorrow  we’ll navigate Lynne Marie up to Green Turtle to take part in the yearly event that is the Stranded Naked Party and then Regatta Time in Abaco. It will be my 3rd year participating in this event and also marks the day I first laid eyes on my now boyfriend, all the more reason to celebrate! 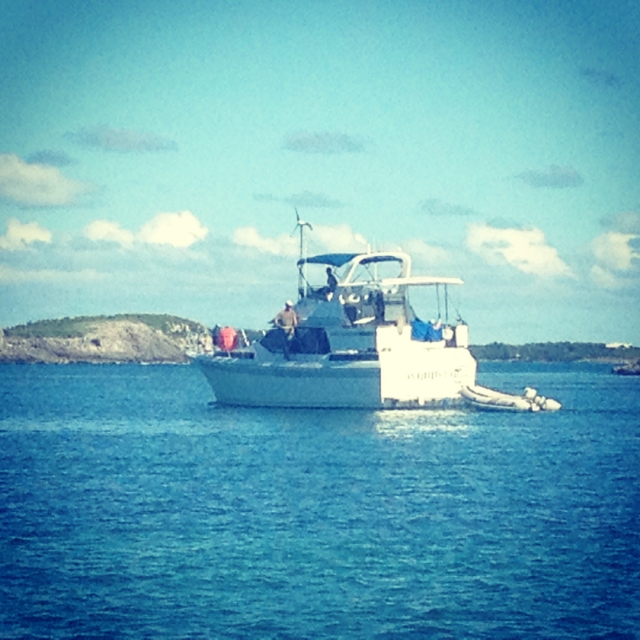 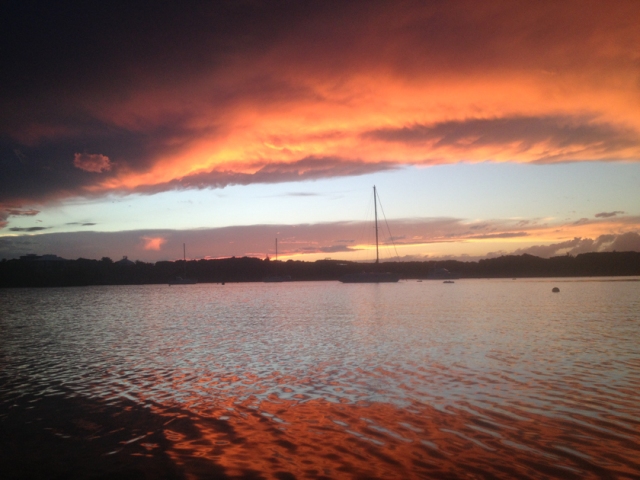 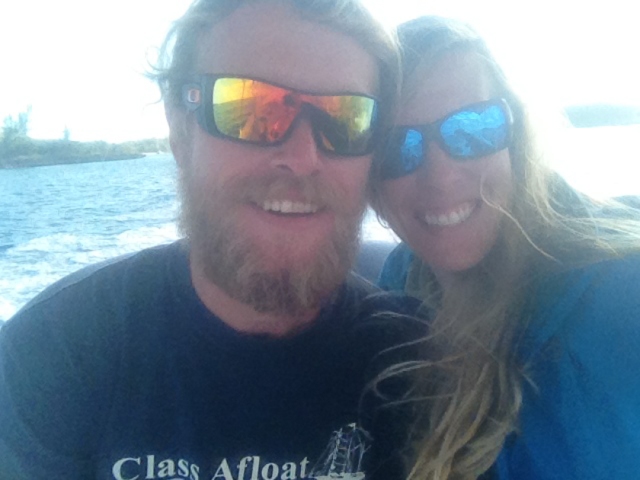 As I reflect back on the course that brought me here, I feel so incredibly lucky, but really I know it had little to do with luck and everything to do with choice. I think back to searching for my boat, living on the dock, the weekly 40hr grind, the weekend after weekend of never ending boat work, the stress and the manic panic of the last couple weeks before shoving off. My mind wanders to where I’d be if I hadn’t taken every single disastrous wave or storm that came along this journey in stride and I can’t even fathom it. But, what I find amazing is the sense it was simply my passion and my choice to “keep on keeping on” that carried me right through it all. I just wanted to sail, to be free, to see the sunrise over new horizons and that was enough to keep me moving in the right direction. It was a long weathering route the majority of which had been completed before I ever actually set sail. Truely it was once I finally got off the dock that things became so much simpler, easy, breezy, fluid. Even though I had little actual “cruising” experience, even though I had little more than the bare necessities, even though I had limited resource and was winging it pretty much on my own, I still managed to find a route to my dreams of sailing off into the sunset. Of course it took form in a ways I could have never imagined. Ironically what started off as a wild eyed burning desire to “sail around world” would curb itself into a much healthier short term obbjective of just getting off the dock to anywhere! The Bahamas was an obvious choice.  I only ended up sailing 350 miles to get to here, but hey that’s all it took for me to reach paradise, now maybe that’s a bit of luck!  I’d still LOVE to sail around the world, but now that seems so much more plausible than it did 6 years ago as a 25 year old who had just learned to sail and knew nothing of cruising. It was realizing that many of the experiences I was seeking in my wanting to “sail around the world” could be had by a much simpler and accessible route that allowed me to start choosing to move in the direction I wanted to go. 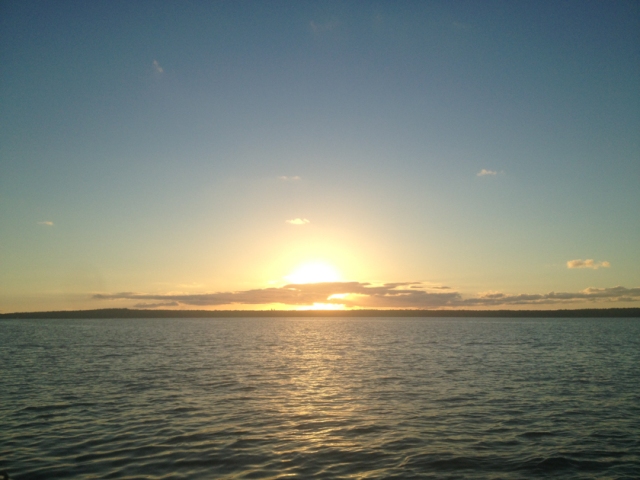 Just can’t get enough of those wide open horizons 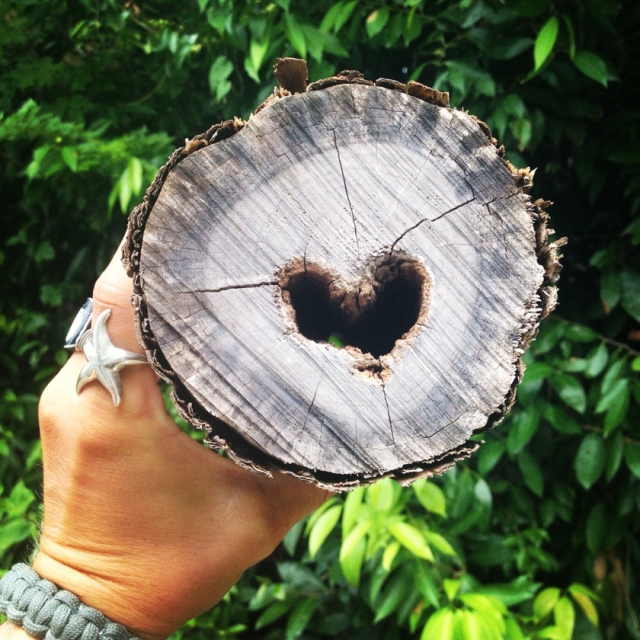 A found a heart in a piece of buttonwood!

I have long forgotten this blog wrapped up in the joys and follies of discovering a new way of life, but I’ve recently felt compelled to share this bit, there may be more to follow…perhaps. I’ve been inspired by many other bloggers and adventures of all kinds along the way and I suppose this is my paying it forward, by adding my voice to their choirs. Another case of done it with zero regrets. It seems more, and more I hear the rallying cry to follow your heart, and I must agree with that.  More importantly, the time is never better than now. Taking even the smallest step in the direction you want to go today can make all the difference tomorrow, no matter how difficult or seemingly impossible the journey. Whatever it is, choose do it now or at least choose to start now by what ever means you can muster or in whatever small way you can. Forget about how you think it has to be done or what you think it should look like and seek a way, anyway that you can make it happen. You CAN do it, but’s its rare you’ll ever hear anyone actual tell you that, so if your lucky enough to have some one tell you “you can” don’t ever forget it. The route my heart directed was never “easy” but at the same time it was never truly difficult either, just challenging, and always rewarding. The biggest reward being where I find myself now. In a place and situation I could have never day dreamed up, where it seems I fit just right, and there’s no place else I’d rather be.  Where now bigger dreams loom over the horizon the likes of which I’d never even considered. How does it get even better than that? Keep on Dreaming and once you reach, don’t forget to dream some more. 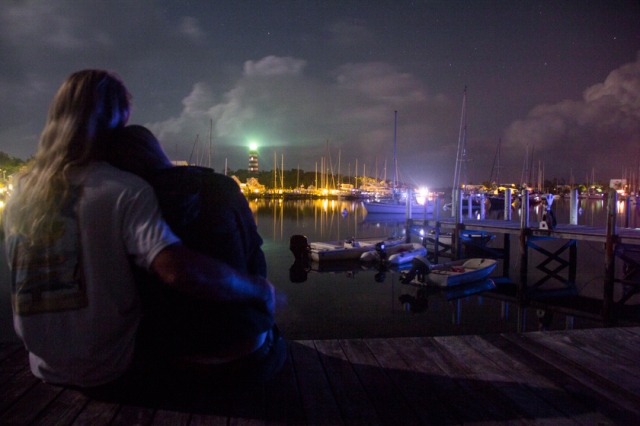