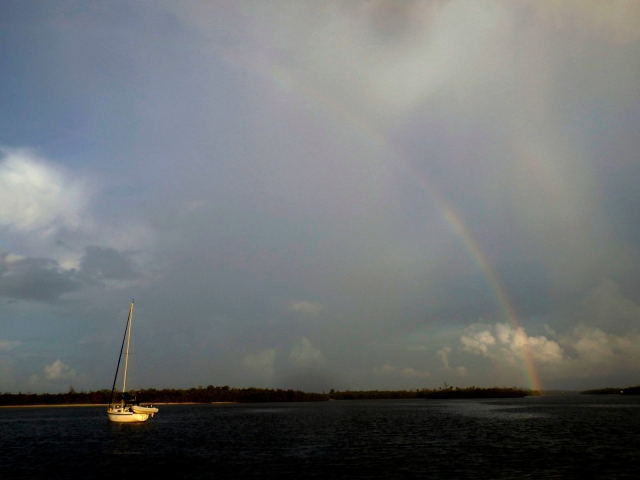 We awoke the morning of June 26th anchored up at Peck Lake about 15 miles north of West Palm. The plan was to jump the Gulf Stream that night, the weather was right but it wasn’t going to stick around. We all knew if we didn’t make it out the inlet that night we could get stuck at Peanut Island waiting to jump.  After coffee and a quick breakfast we prepared to pull anchor, I fired up the diesel and realized something didn’t sound quite right…. pulled the kill switch and hopped down to investigate…

I’d lost a nut off the back of one of the bolts connecting the alternator, as a result the head of an opposing bolt had been sheared off leaving the alternator dangling….. hmmmmmm this is not so good, I don’t have the tools for this…. but I know a neighbor who might!!

The evening before a nice Aussie, Jeremy, and his friend Skip had dinghied over to introduced them selves and investigate just where 3 young ladies on a sailboat had come from and where they were headed. We chatted for awhile about our plans and theirs. Jeremy left us with one of his cards, a Marine engineer , couldn’t of written it better. So I buzzed over to see if I could possibly burrow some tools…. and some expertise?! Sure enough Jeremy was happy to help. With a little patience and a bit of tinkering we got the sheared bolt tapped out and the engine alternator secure enough to make West Palm. A big round of hugs and many thanks was showered upon Jeremy, and we were off down the ICW once more.

Sailboat community, got to love it, everyone is always willing to lend a hand, Thanks Jeremy!! 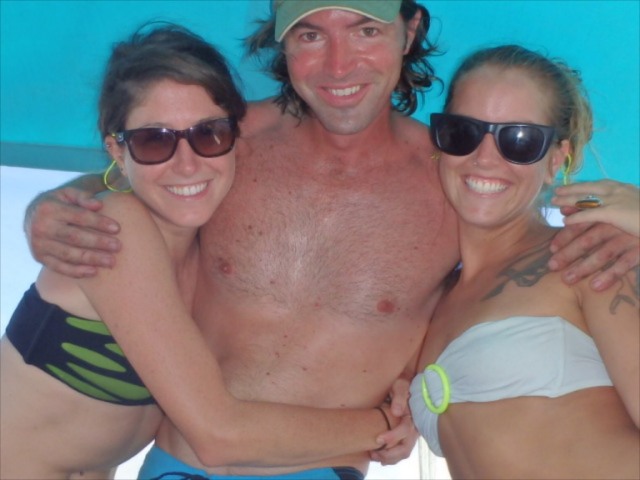 Jam and Roo Cheesin with Jeremy

But we weren’t quit in the clear yet, I still needed to get some hardware to finalize repairs, we could make it down the intercostal, but across the stream was a different story… I put the girls on the helm and I busied my self below, stowing things away, preparing the ditch bag, collecting batteries, GPS’s, navigation devices, emergency gear ect. We cleared the last bridge into North Lake Worth about 4 o’clock. We pulled up to a fuel dock to top off the tanks and find a local hardware store. Guys on the dock were great and told us we cold stay tied up as long as we needed, I hopped below and searched for what was close by, grabbed my purse and got ready to go hail a cab. No need. The girls had made some friends standing on the dock, a father in son who managed the mega yacht tied up on the next slip. Pops, as he introduced him self was going run me wherever I needed. So off we went to Ace Hardware, Pops and I rummaging through the metric hardware drawers searching for what would work just right.  We talked about the crossing and Pops shook me down about route, navigation, equipment, provisions and what all we had on board. It was a good little run down that got me focused on just what I was about experience the next 24hrs. Back on the dock I made the final repairs, against all odds, time it seemed was on our side that day, we were going for it.  We decided one round of shots was needed to clam the nerves and have a proper farewell cheers with Pops and B. We climbed aboard Lynne Marie just about 7 o’clock and pushed off the dock for GOoD, waving good bye to our new found friends.

Our last Florida sunset… I totally missed it. Good on Jam for snapping the pic!

Now I can’t tell you what Lake Worth, Peanut Island or the Inlet there looks like… not even one bit. I had the girls on the helm again while I was down below in a fairly manic state. Once more pouring over routes, headings, waypoints, gps settings, and all those little details that suddenly come to mind as you’re headed out to navigate your sailboat home with two of your dearest friends onboard across the gulf stream…. Finally as the last light of day left the sky I emerged into the cockpit to see the lights of West Palm falling away behind us.  Jam and Roo did a great job all day moving us down the intercostal and now that’d moved us right out the inlet.  We had a compass heading of 120,  the GPS was programmed, and the chart was out below waiting to be plotted upon. I was finally confident I had it all worked out correctly and now all there was to do was hold a course, trust the compass and whisper sweet words to the sea that she may keep us in her favor.

It was a long night after a long day followed by another long day. We were bucking both the wind and the current motoring through the night and though the wind was light and the waves only about 3ft the ride was pretty jarring.  We spotted only a few lights from passing freighters, none that came close, but it’s amazing just how fast they actually move. Jam was the auto helm of the night, I swear, Good Tunes equals Rocket Fuel to that one, she bobbed along on the helm thru the wee hours of the morning till sunrise. Roo asleep down below, me taking intermitted naps in the cockpit between, giving breaks on the tiller, checking coordinates and plotting our course. When the sun came up we were with in sight of the Bahama Bank, just where we wanted to be. That navigation jazz, it works.  Jam went down for some sleep Roo got up to take over. Finally out of the stream and on to the bank the waves settled to a gentle roll. Roo and I took turns on the tiller catching naps in the cockpit as we could.

Jam catching some ZzZ on the bow

We pulled up to Great Sail about 5pm and threw out anchor. We had made it, with a lot of help & guidance from friends old & new,  we had successfully navigated the Gulf Stream and landed our selves in northern Abaco.  Break out the Champagne!  A good nights sleep quickly followed dinner. Tomorrow new problems would be waiting, but that’s a story for another time…

Fair winds till then,

Cheers WE MADE IT!